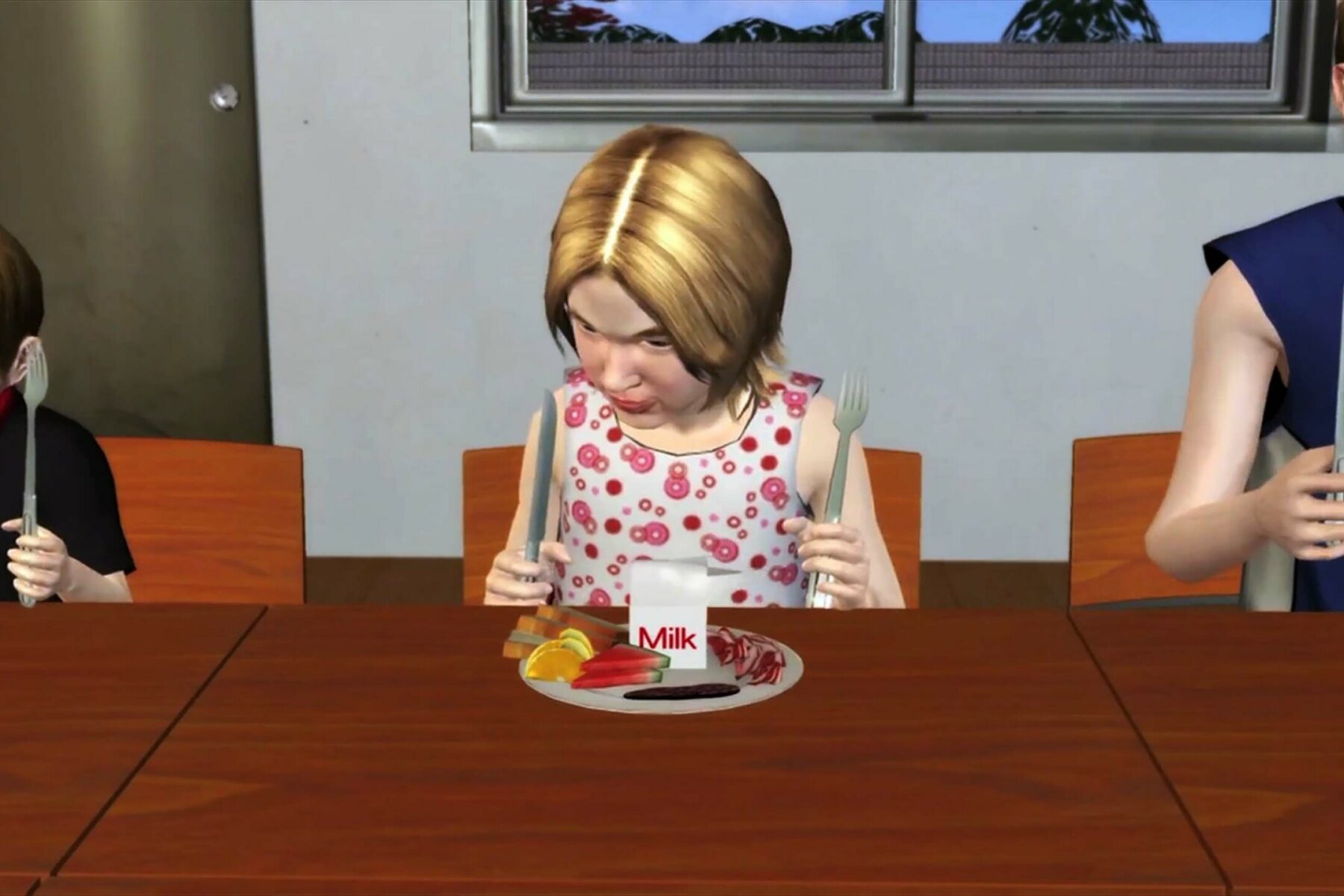 PEGGY AHWESH
VISION MACHINES
25 September 2021 to 16 January 2022
The first survey exhibition in the UK by pathbreaking artist and filmmaker Peggy Ahwesh. Co-curated with film scholar Erika Balsom, the show includes films, videos and installations made between 1993 and 2021 that explore the relationship between corporeality and technology, spanning notions as diverse as gender, climate change and war. Vision Machines is accompanied by the first book dedicated to Ahwesh’s practice, which includes texts by film scholars Erika Balsom and Elena Gorfinkel, writer Tendai Mutambu, novelist Shola von Reinhold, and a conversation between the artist and academic John David Rhodes, published by Spike Island and Mousse Publishing.

LUCY STEIN
WET ROOM
25 September 2021 to 16 January 2022
The first UK institutional solo exhibition by artist Lucy Stein, including a hand-painted tiled wet room inspired by the artist’s research into the fougou: ancient womb-like Neolithic passages unique to West Cornwall. Surrounding this centrepiece are a series of new paintings and drawings that build upon Stein’s lasting engagement with Northern European expressionist painting, ecclesiastical imagery, goddess culture, and the idea of the “anima”. Wet Room is part of the West of England Visual Arts Alliance programme, supported by Arts Council England. Following its presentation at Spike Island, the exhibition tours to the De La Warr Pavilion in Bexhill-on-Sea in Spring 2022.

CANDICE LIN
PIGS AND POISON
5 February to 8 May 2022
A major new commission by artist Candice Lin that expands her ongoing research into marginalised histories, colonial legacies and the materials that link them. Pigs and Poison includes flesh-like sculptures, a virtual reality animation, and a huge medieval trebuchet that launches cannonballs made of lard and bone black pigment directly at the gallery walls. Pigs and Poison is commissioned by Spike Island, Bristol; Govett-Brewster Art Gallery, New Plymouth and Guangdong Times Museum; and is part of the West of England Visual Arts Alliance programme, supported by Arts Council England. The exhibition is accompanied by a richly illustrated catalogue, with contributions from Jih-Fei Cheng, Robert Leckie, Lisa Lowe and Shani Mootoo, as well as a conversation between the artist and Alvin Li.

ADAM KHALIL AND BAYLEY SWEITZER WITH OBA
NOSFERASTA
5 February to 8 May 2022
Nosferasta is a Rastafarian vampire film by filmmakers Adam Khalil and Bayley Sweitzer, starring and co-written by artist and musician, Oba. Spanning 500 years of colonial destruction, human trafficking and blood-sucking, the film reimagines Oba’s life: in the late 15th century, he is shipped as cargo from West Africa to the Caribbean, where he is seduced by the vampire Christopher Columbus, ensuring his undying allegiance to the colonial project. Nosferasta is commissioned and produced by Spike Island, Bristol and Gasworks, London, and is part of the European Cooperation project 4Cs: From Conflict to Conviviality through Creativity and Culture, co-funded by Creative Europe and the Royal College of Art. The film is also supported by Cinereach. 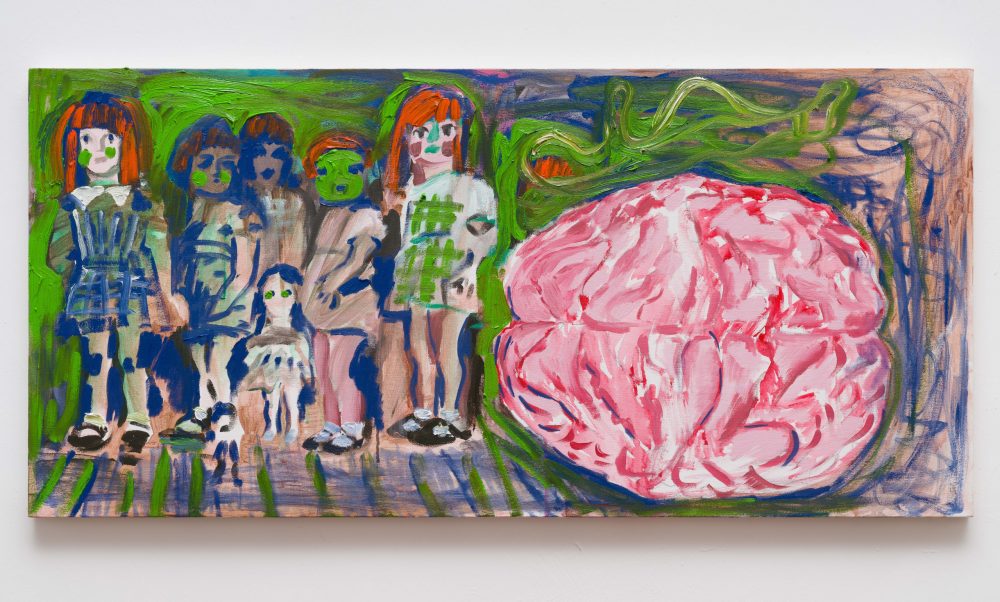 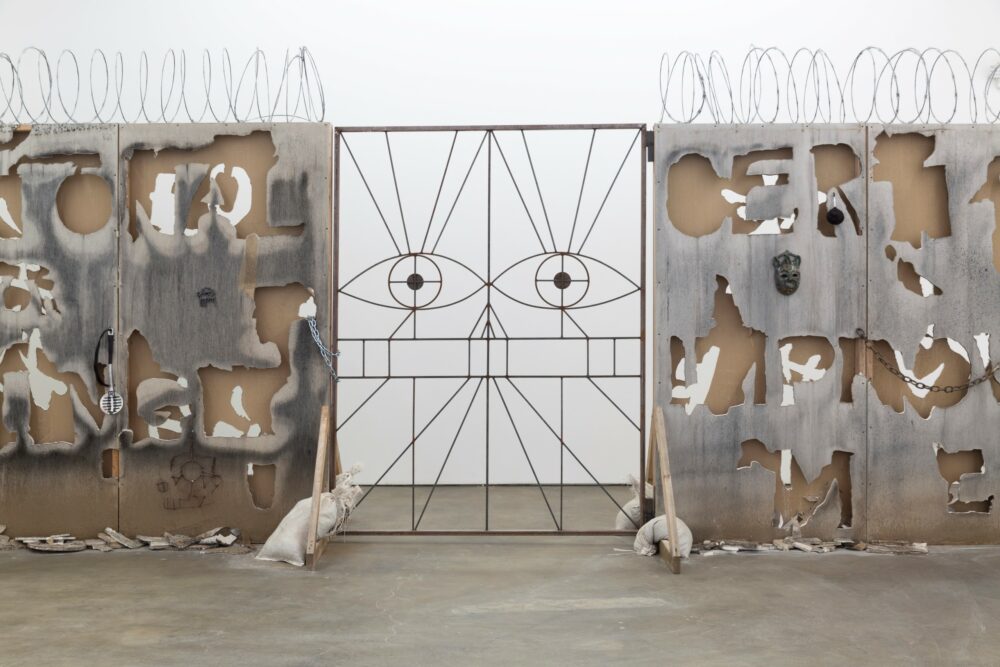 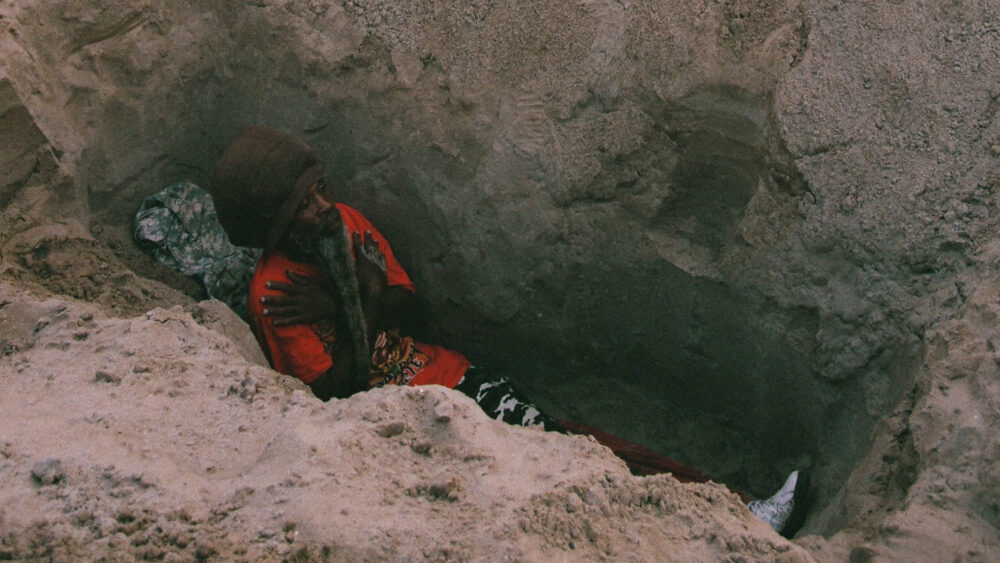 DIGITAL COMMISSION: DANIELLE BRATHWAITE-SHIRLEY
17 March to 19 April 2022
An interactive digital commission by artist Danielle Brathwaite-Shirley, that simulates an MMO (massively multiplayer online) game. The audience’s actions will influence the evolution and structure of the game, as will their identities and how they have historically taken up space in the world. Developed in partnership with Berwick Film & Media Arts Festival and CIRCUIT Artist Moving Image Aotearoa New Zealand.

ERIC BAUDELAIRE AND ALVIN CURRAN
WHEN THERE IS NO MORE MUSIC TO WRITE
28 May to 18 September 2022
A two-person exhibition by artist and filmmaker Eric Baudelaire and composer Alvin Curran. Co-curated with music historian Maxime Guitton, the exhibition includes a new film exploring how Curran’s life and work intersect with the radical political movements emerging in Italy and around the world during the 1970s. When There Is No More Music to Write is presented in partnership with CRAC Occitanie and Bergen Kunsthall, and supported by Fluxus Art Projects.

TANOA SASRAKU
28 May to 17 July 2022
A major new commission by artist Tanoa Sasraku sees the artist rendering monoliths and megaliths in thread-bound newsprint. These forms, tethered to the gallery space, draw upon relics of her paternal heritage via the Fante Asafo war flags of Coastal Ghana, geometric forms found in Tartan cloth, and the rural expanses of Dartmoor and the Scottish Highlands. The exhibition is part of the West of England Visual Arts Alliance programme, supported by Arts Council England. 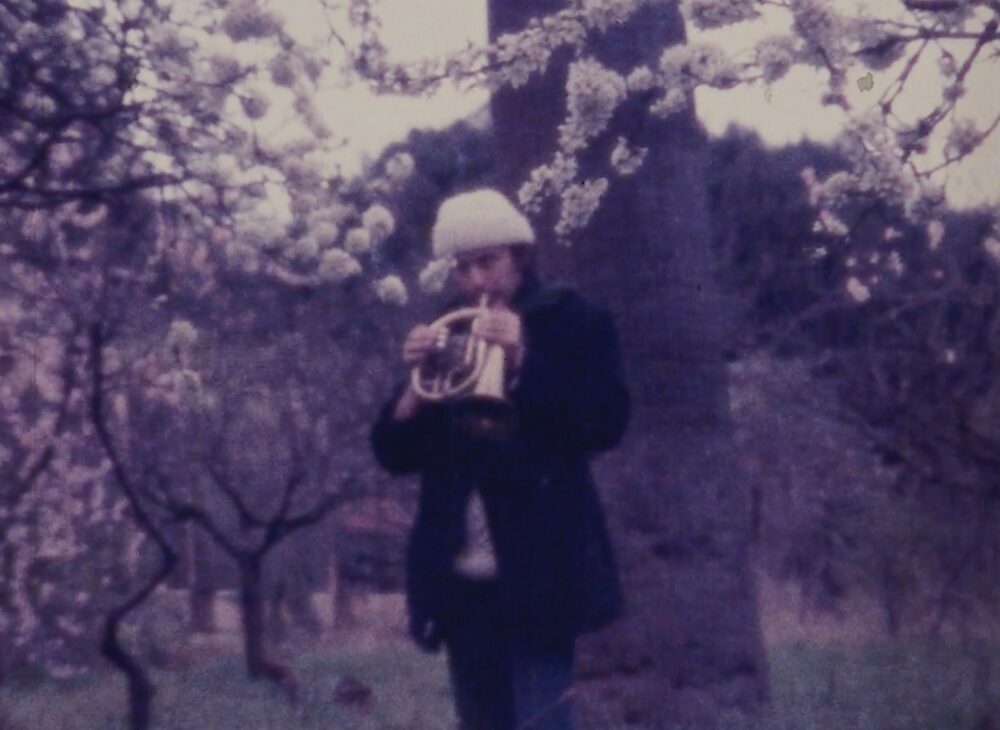 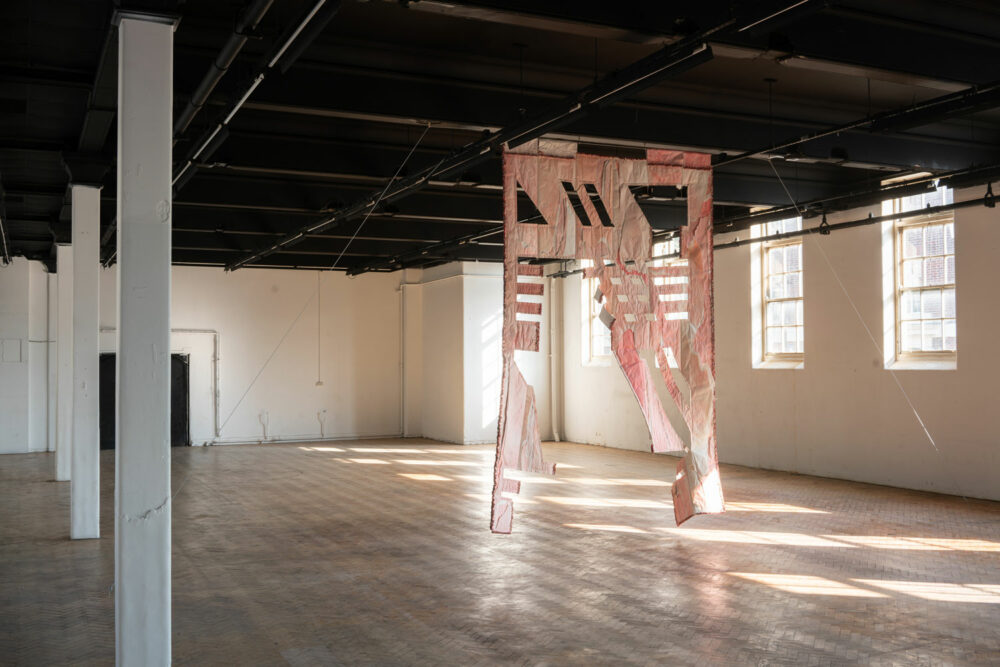 AMITAI ROMM
27 July to 18 September 2022
The first UK solo exhibition by artist Amitai Romm explores how scientific modelling relates to more open-ended forms of world-making. Romm encrypts and relays data from one of the world’s oldest continuous datasets of carbon sequestration—an environmental sensing system set up in a mature beech forest in east Denmark in 1996—to produce new works in sculpture and sound, from a series of parabola satellites moulded from plant fibres to the minor oscillations of a low-frequency drone. Supported by the Danish Arts Foundation, Grosserer L.F. Foght Fund, Knud Højgaard Fund and 15 June Foundation.

ROSEMARY MAYER
WAYS OF ATTACHING
8 October 2022 to 15 January 2023
The first exhibition in the UK by artist Rosemary Mayer (1943–2014), a founding member of A.I.R. Gallery in New York, which was formed in 1972 as the first all-female cooperative gallery in the United States. Mayer is primarily known for her gauzy and colourful fabric sculptures named after historical women, such as Hroswitha (1972–73), a celebrated 10th century nun-poet and Galla Placidia (1973), a major force in 5th century Roman politics. Ways of Attaching is organised in partnership with Swiss Institute, New York; Ludwig Forum, Aachen; and Lenbachhaus, Munich; and is supported by the Terra Foundation.

LAWRENCE ABU HAMDAN
THE 49TH PARALLEL
8 October 2022 to 15 January 2023
A major new film commission by Lawrence Abu Hamdan focusing on the Haskell Free Library and Opera House—a unique municipal site between the jurisdictions of Canada and the US. Telling stories of permeable borders and impermeable laws, the work reflects on how free movement, free knowledge and free space are under threat. The 49th Parallel is commissioned by Spike Island, Bristol; the Toronto Biennial; Mercer Union, Toronto; Sharjah Art Foundation; and the Western Front, Vancouver. The film is produced by LONO Studio and supported by Arts Council England and the Ford Foundation. The exhibition is part of the West of England Visual Arts Alliance programme, supported by Arts Council England. 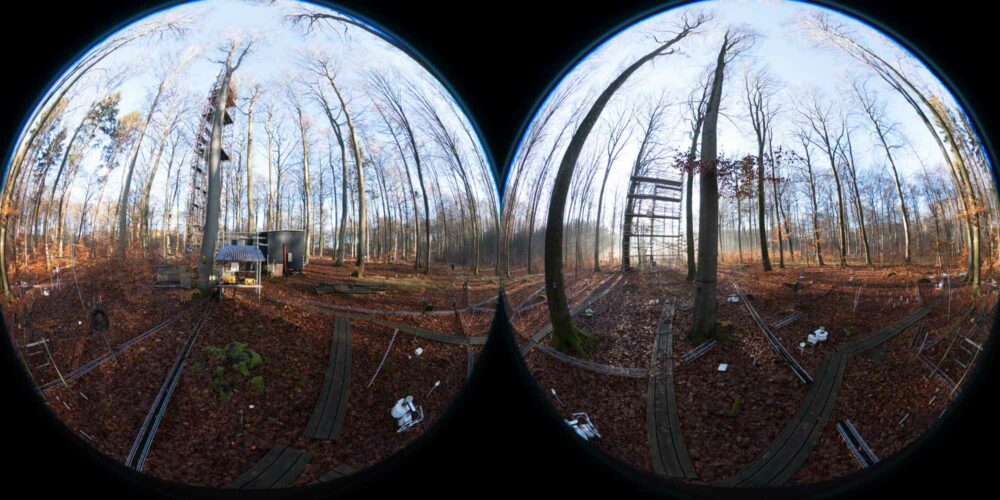 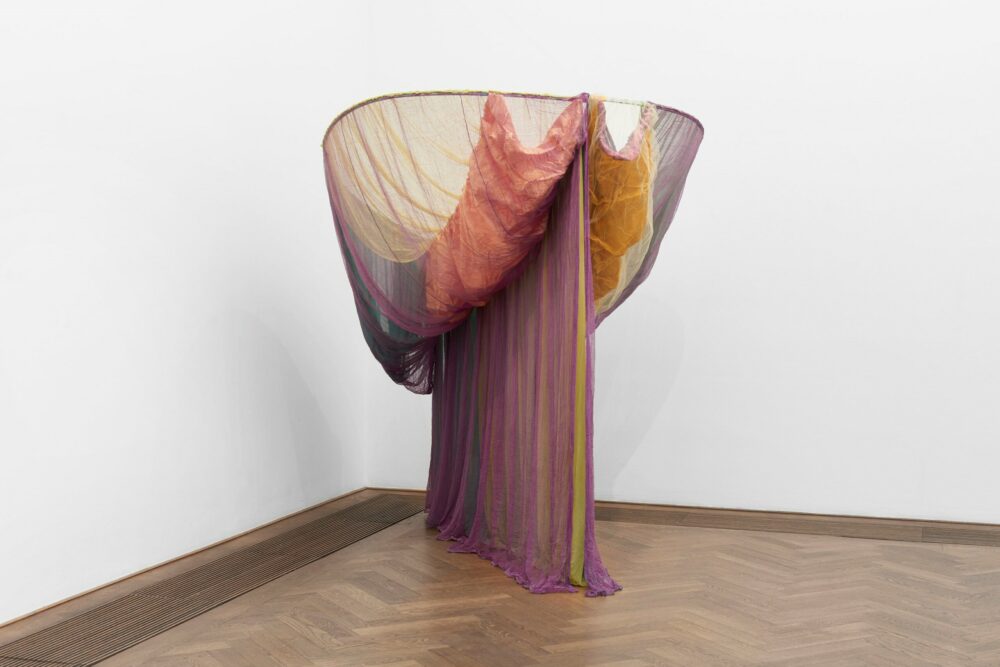 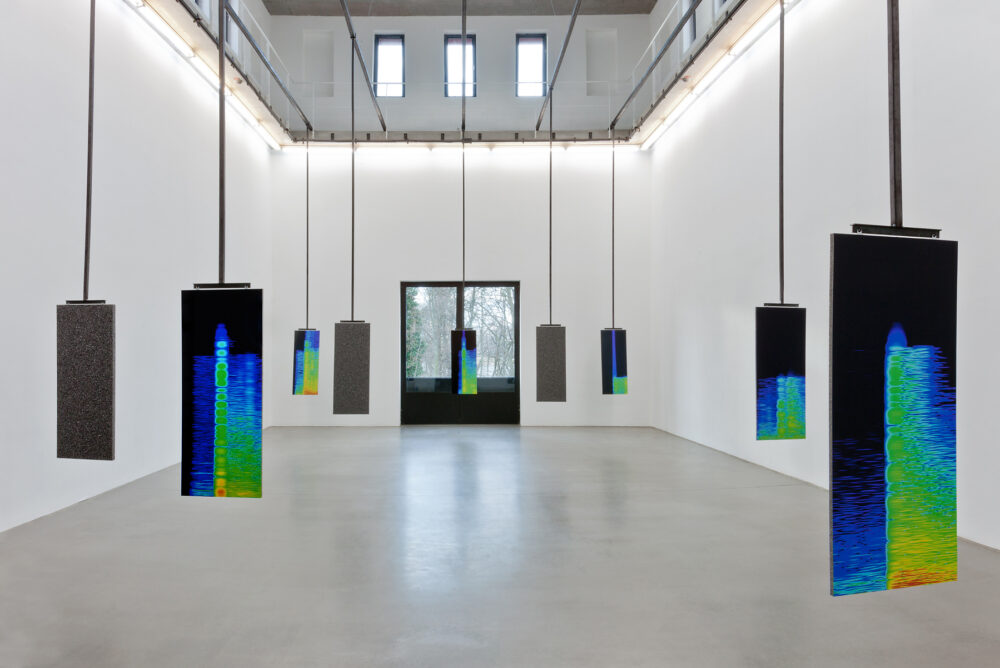