Set in the aftermath of an eco-disaster. A vast bunker under the biblical town of Bethlehem has been converted into an enormous orchard. Using heirloom seeds collected in the final days before the disaster, a group of scientists are preparing to replant the soil above.

In the hospital wing of the underground compound, the orchard’s ailing founder, 70-year-old Alia, is lying on her deathbed, as 30-year-old Alia, Dunia’s successor, comes to visit her. Alia is born underground and has never seen the town she’s destined to rebuild.

The talk between the two scientists soon evolve into an intimate dialogue about memory, exile and nostalgia. Central to their discussion is the intricate relationship between past, present and future, with the Bethlehem setting providing a narratively, politically and symbolically charged backdrop.

In Vitro was commissioned by the Danish Arts Foundation for the Danish Pavilion at 58th International Art Exhibition – La Biennale di Venezia and produced by Spike Island.

Sansour’s solo exhibition for the Danish Pavilion Heirloom, is curated by Nat Muller.

In Vitro was filmed in Bethlehem, London and Oxfordshire

Larissa Sansour was born in 1973 in East Jerusalem, Palestine, and studied fine arts in London, New York City and Copenhagen. Central to her work is the push and pull between fiction and reality. In her recent works, she uses science fiction to address social and political issues. Working mainly with film, Sansour also produces installations, photography, and sculpture. Her work has been shown in film festivals and museums worldwide, including at the Tate Modern, the Museum of Modern Art in New York, the Centre Pompidou and the Istanbul Biennial. Recent solo exhibitions include Bluecoat in Liverpool and the Nikolaj Kunsthal in Copenhagen. Sansour currently lives and works in London. 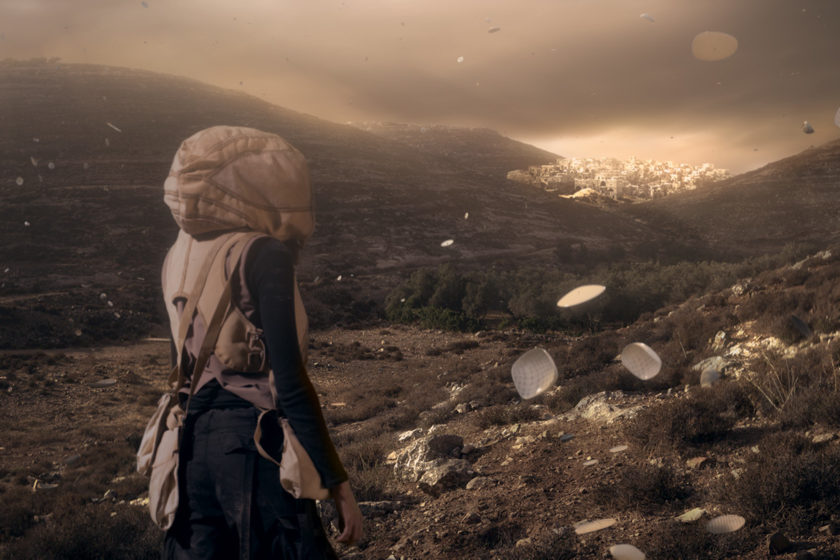